Seeing the light at the end of the tunnel

It's been too hot (for me) to work outside for more than an hour or so in the early mornings.  So, I've been concentrating on what I want to get done inside before I move in my stuff.

I wanted to replace all the carpets (extremely pee-stained by P.O. pets) with tile (because of my little dog).  So, while I was waiting for the tile work to get scheduled and completed, I had time to paint a couple bedrooms and remove all the baseboards (for painting as well as prep for the tile work).

The painting was a necessity!

While I'm sure the little girls loved the color schemes and doo-dads (little flowers on the ends of the curtain rods; unicorns on the ceiling fan pull-strings), a more mature look was needed for me. 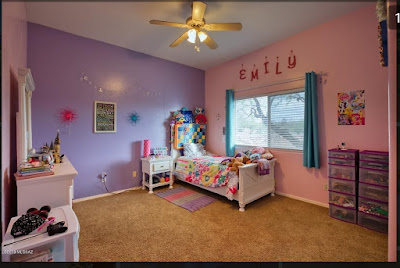 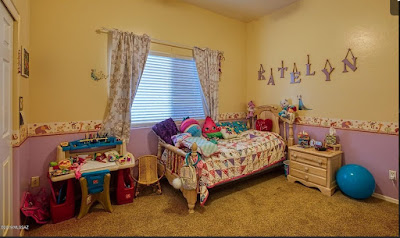 So, first, the baseboards had to come off.  Not only in these 2 bedrooms, but also in the 2 bedrooms I'm hoping not to paint this year.


Taking off the baseboards disclosed more termite damage which meant another trip out to the house for the termite company!

The bedrooms required primer and 2 additional coats of paint - I listened to several audiobooks to keep me sane throughout the tedious work. 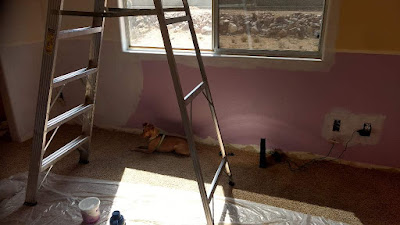 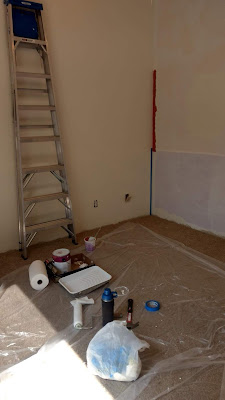 But, finally, the painting was done!!  The walls are now a lovely cream color with a different accent wall in each room.  I really like the green and the dark brown; not so fond of the dusty rose - I thought it would be more muted.  But, after running back and forth to Home Depot and trying over a half dozen tester paints, I was just too worn out to continue looking at different colors

My tile finally came in and the job got scheduled - really only about a week after what was initially proposed.

I was so glad to see the last of the icky carpet!  This is only some of the carpet; the guys used huge segments of the rugs to protect the tile coming in to the house and under all their tools in the garage and front porch where they set up their saws and prep work stations. 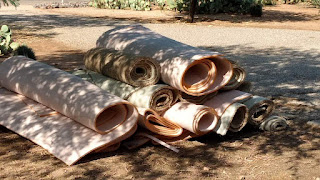 I was quoted 5 days for the job - and I thought that was tight.  But, the team of guys (3, then 4) were extremely fast - 3 bedrooms were largely tiled by the end of the first day (well, they did show up before 7 am!!).  They finished up those rooms and then completed the master bedroom and walk-in closet the second day!!  I was amazed!


My existing tile isn't made anymore; but, I like the new tile and I think it looks pretty good with the old tile. 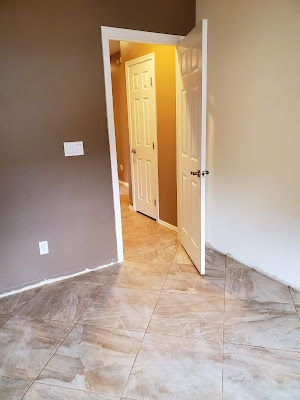 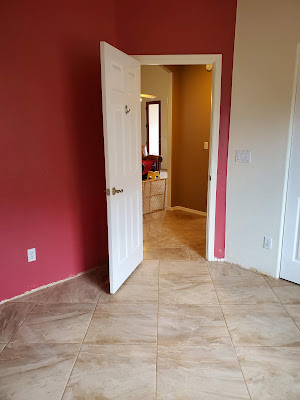 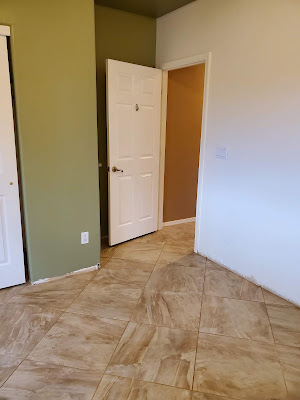 One last chore for me was to replace the closet door guides.  The old ones were too short with the carpet gone.  I didn't want to (and my drill is in storage in Oregon anyway) drill into the new tile, so we'll see how the epoxy glue holds. 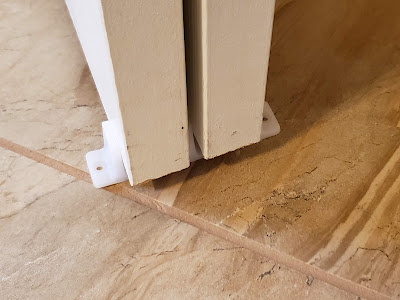 All the outlet covers and HVAC covers are back on.  Now, I just have to fix up the baseboards, and then put them back on.  I think I'll be renting a nail gun to help with that chore - I've never used one before, so that should be interesting.  Hope I don't nail my foot to the floor.

I'm not the only one renovating!

My resident tarantula is excavating her den - or maybe just cleaning out after the last big rain.  The pile of fresh dirt in the middle of the photo is what she's dragged out of her burrow.  The burrow is just below the pile of dirt - a quarter-sized, perfectly round hole that goes down about 6 inches before angling off to a horizontal layer. 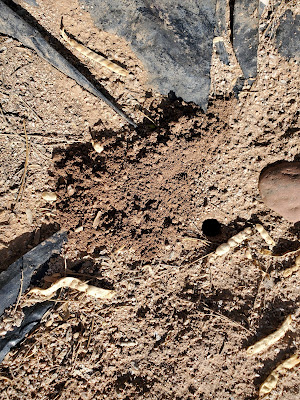 
Monsoons bring migrations for some; end-of-life for others.

The Giant Mesquite Bug is nearing the end of it's lifespan after laying eggs in the mesquite's for next year.  I'm finding them more frequently these days.  They are so spectacular - hope to see one alive someday!!

Male tarantulas are migrating through the area.  I've seen two - but, haven't seen them hanging around the female tarantula who lives in a burrow in my back yard.  Is she not desirable? a different kind of tarantula? chasing them away?  who knows . . .

If only he'd gone into the backyard, maybe he could have hooked up with this female hanging out by her burrow. 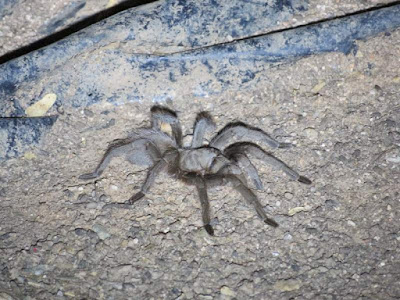 Everyone takes a siesta down here

Even when the monsoons cool down the temps a bit - it's hot.  The bunnies, and even Phoebe, dig shallow wallows in the dirt and rest for a bit in the hottest part of the day (well, usually Phoebe is inside in the AC, but if I'm in the pool, she digs a cool spot). 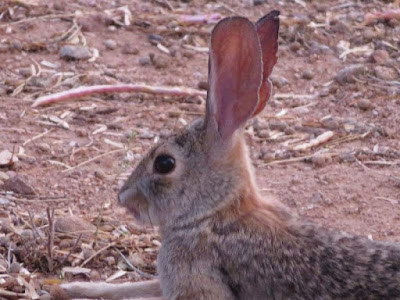 I looked out my kitchen window a couple of days ago and spied this tiny little baby Spiny Lizard.  The Spiny Lizard is the biggest lizard I've seen in my neighborhood; so, it was a lot of fun to see this miniature version!

I want to take out most of the boring yucca and prickly pear in my front yard and replace it with interesting, more colorful native cacti.  But, I keep finding reasons to not disturb the current landscape.  One of the big mounds of yucca hides the home of a couple big Spiny Lizards; I already took away the pile of mesquite branches that one of them was living in - and, I haven't seen him since (he had been a regular visitor, sunning on my back fence).

This ground squirrel has a hole at the base of one of my boring prickly pears; I'm afraid that if I take the cactus out, I'll lose the squirrel. And, finally, I see some Javelina!!

I've been wanting to see some bigger mammals (I've only seen a couple coyotes; no bobcats yet), and yesterday, I got my wish.

I was sitting outside in the early morning having coffee when Phoebe suddenly alerted to something outside my back fence.  I grabbed my camera and tore over to take a look.  6 Javelina (including 2 babies) were slowly making their way around the fence line.  They didn't panic as I followed them around and tried to get some pics - but, they kept up a pace, so I had to be satisfied with some fuzzy shots and some butt shots.  But, happy I am to have seen them; Hopefully, they'll be by here again.

Phoebe was beside herself excited; I didn't know she could jump so high as she leaped into the air trying to catch sight of them. 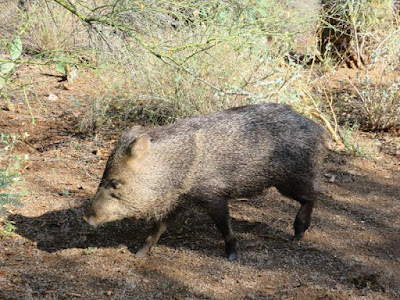 I love my little acre in the desert 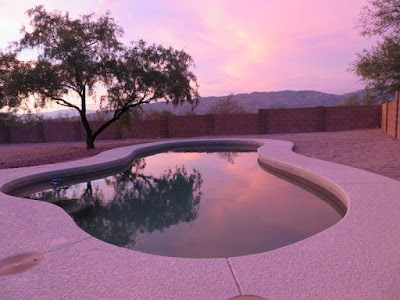 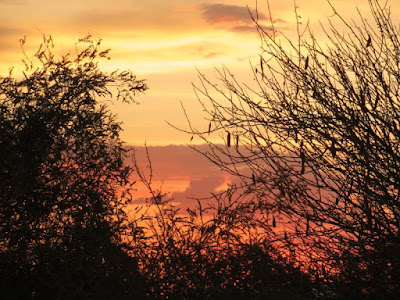